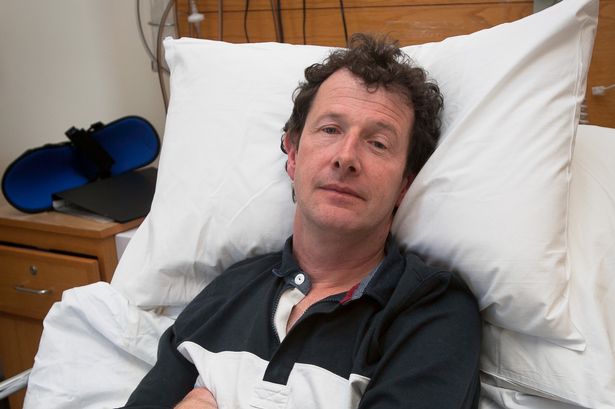 Gerard Murphy at the Royal Hospital in Donnybrook, Dublin

A Multiple Sclerosis patient has welcomed claims that the HSE looks set to fund a miracle drug.

Gerard Murphy, 49, yesterday admitted he is still skeptical about the Government coughing up to provide potentially life-changing drug Fampyra to people with crippling MS.

Gerard, from Balbriggan in North Dublin , was speaking after the HSE confirmed progress has been made in negotiations with pharmaceutical company Biogen to get the drug at a significantly reduced price.

The breakthrough comes just weeks after the Irish Mirror highlighted how sufferers of the devastating illness, like Gerard, are being given Fampyra for free for a month before it is snatched away unless they can pay €500 each month.

The father-of-three said: “I applaud any practical and sensible approach that might help MS patients access Fampyra.”

But he’s sceptical until he sees some real proof.

Gerard added: “I am supportive of this news but we need to hear real figures and timelines about this.”

The tireless campaigner got Fampyra for free for five years – but a policy change this year meant he had to stop taking it in January as he could no longer afford it.

Since then his condition has deteriorated and he needs a carer for an extra three hours a day.

He blasted the excessive cost of the medicine, saying: “There are approximately 8,500 people living with MS here.

“The FDA in the US showed that when Fampyra was trialled, it worked well on a third of people.

“If one-third of people here would benefit, it would be cost neutral, in my opinion, once you consider the extra care that many people need without it.”

Gerard also criticised those behind the policy change, saying: “The HSE are controlled by politics and money.”

He revealed: “I’ve just been in hospital for four weeks.

“I’m able to manage the pain but I am very much confined to a wheelchair and I’m reliant on my carers and those around me.”

Reports yesterday claimed the company behind the drug has offered to supply it to the HSE at a much lower cost.

The HSE said in a statement: “We can confirm that significant progress has been made in commercial discussions with Biogen.”

As Fampyra does not work for everyone, the HSE will most likely only fund it for those it has a positive affect on during a trial period.


Story Source: The above story is based on materials provided by IRISHMIRROR
Note: Materials may be edited for content and length
Click here to read original article
Posted by Josi Creek YDCtv at 1:16 PM